TUBE-TECH has been around for 40 years. And over the years, more than 15,000 Blue Units have been shipped from Lydkraft, Denmark.

Lydkraft was founded in Denmark in1977 by John G.Petersen and two partners.

The company originally served the PA market but turned away from this area of business in 1980 when John Petersen took over the company and focused his efforts towards the design, development and manufacturing of direct boxes, mixing desks and speaker systems.

John G.Petersen was educated as an electronics engineer at Danish Post and Telegraph in 1969 and worked from 1972 for the Danish Broadcasting Company as maintenance engineer on a host of different applications.

Besides his many other activities, John also got involved in a heavy console-refurbishing project. The old console from Workhouse Studios, London had been bought by MOX Studio, Copenhagen in 1979 and needed serious refurbishing work.The console was delivered non functional, without any documentation.

John went through every single wire and circuit and added several new features to the Workhouse console, and after a fair amount of time it came alive again. The basic build quality of the console was very good, and thanks to John, it has been producing music and sound for more than 27 years and it”s still performing extremely well.

During the early eighties, John came across several classic tube processors such as the Pultec equalizers, and
Teletronics compressor LA2A. John liked the high quality and the simplicity of these units and started working his own tube designs.

Due to decreasing sound quality from modern studio consoles, the demand for vintage high quality tube gear was increasing and John decided to start development of his own units in 1984. John’s fascination of classic high-quality analog sound made him start designing the TUBE-TECH line of all-tube signal processing equipment.

The first tube-based unit bearing the Tube-Tech name was the Program Equalizer PE 1A that shipped in 1985.

Production of the first TUBE-TECH unit took place in Johns private garage, and the PE1A Program EQ and Midrange EQ ME1A were almost direct copies of the Pultec units, since John wanted this high quality design to be available to a bigger group of studio customers. After these two units followed the whole line line of “classic” TUBE-TECH units, all designed from the ground up by John G. Petersen.

Over the years, the TUBE-TECH units have gained a fantastic reputation in the audio business. The CL1B compressor has become a world standard and the SMC2B has gained reputation as the leader in analogue multiband compressors.

Today, it’s hard to find a major studio anywhere in the world, that doesn’t own a TUBE-TECH. Thanks to John Petersen”s dedication to high-quality analog sound you”ll see Tube-Tech gear in the racks of pro audio legends such as:

And the list can be continued by many, many more prominent names. It seems that TUBE-TECH gear always creates strong relationships with users. Numerous superstars have grown big fans of the TUBE-TECH sound. 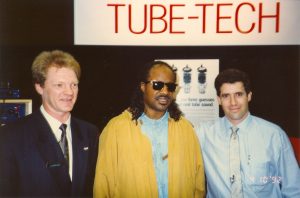 A few examples: Stevie Wonder visited the AES Show in 1987 and realized, John Petersen was at the booth. As a real fan he wanted to shake hands with the designer.

In 1999 Michael Jackson wanted a CL1B so bad for his live appearance in Paris that this became crucial for for his performance at the concert. John had to ship the unit express from the factory to the concert venue, and everything finally turned out very well.

The list of top stars and studios, who love and support TUBE-TECH is endless.

TUBE-TECH is one of the very few audio manufacturing companies in the world that has continued a tradition of delivering the same super high quality for now a quarter of a century. Newer units like the SSA2B Summing Amp and the RM series bring TUBE-TECH quality to the many personal home studios of today.

A very common action theese days: Lowering quality to match a cheaper price is NOT an option for TUBE-TECH. John Petersen simply refuses to match his designs to a marketing controlled price just to sell more units.
TUBE-TECH quality has to stay at the highest level, no matter what the costs are.

Young engineers and artists, some not even born when John designed his first units, is today realizing that TUBE-TECH processors deliveres top results in recording and mixing, a quality thats not obtaiable from discounted equipment and plug-ins.

This is the reason why the TUBE-TECH sound, quality and units lasts forever.