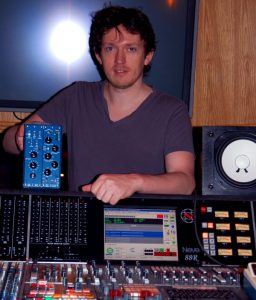 John O’Mahony is a Grammy Nominated mixer and producer known for his indie-rock sensibilities, having worked with such acclaimed artists as Coldplay, Metric, Alberta Cross, Kaiser Chiefs and The Cribs. John O”Mahony”s main working base is Electric Lady Studios, NY.

We met John O”Mahony in Copenhagen August 2009, when he and Andy Wallace was working with Danish top band KASHMIR.

Jesper Bo supplied the RM8 rack containing both mic pre’s PM 1A, EQ’s EM 1A and compressors CM 1A for the recording, and both John O”Mahony and Andy Wallace fell in love with the gear. Especially the opto compressor CM1A made the two gentlemen and the band very happy. 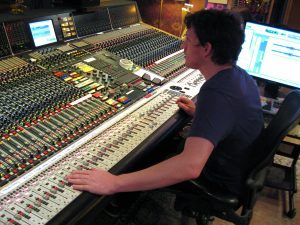 The compressors are featured on all bass drum and snare drum tracks on the production (used in recording), while the Mic pre’s are used on numerous other sources, like bass, keys and guitars.

John O’Mahony has been using a RM2 rack featuring EQ and compressor in Electric Lady for some time, and he has been so kind to share some of his sounds with us that you can listen to right here:
Snare (bypass)

“I’m blown away by the CM1A compressor, its response is amazing, I never thought a Tube compressor could react like this!”

John O’Mahony now lists the CM1A as one of his favorite compressors.

John O’Mahony is a Grammy Nominated mixer and producer known for his indie-rock sensibilities, having worked with such acclaimed artists as Coldplay, Metric, Alberta Cross, Kaiser Chiefs and The Cribs.

Recent career highlights for John include mixing and contributing additional production to Metric’s 2009 album “Fantasties” which quickly went Gold in Canada, and topped the US Billboard Heatseekers and CMJ Album charts; mixing Metric’s 2 previous albums – including their Canadian platinum selling “Live It Out”; tracks on Coldplay’s multi-platinum Grammy Award winning “Viva La Vida Or Death And All His Friends” and mixing Depeche Mode “Live At World Cafe”.

As part of the mixing team for “Viva La Vida Or Death And All His Friends” John was also awarded the 2009 Tec Award for Outstanding Creative Achievement in the category of Record Production / Album.

John moved from his native Ireland to New York City in 1998 to work as a staff engineer for the infamous Chung King Studios for 3 years. In the summer of 2001, John became an independent engineer splitting his time between mixing albums alone and engineering for legendary mixer Andy Wallace.

While always interested in traveling John is currently based out of Electric Lady Studios in New York City.

“It’s a really exciting time for audio technology, there are still a few classic pieces I love but today”s business calls for zero downtime and reliable recall ability so I’m finding myself using more modern designs that have been inspired by the vintage legends”.