CL1B on the road for the Bass

Scotty Simpson was only eleven years old when he picked up the bass, and he was only fourteen years old when he started playing regular gigs in clubs. His guitar-playing brother, ten years his senior, served as a “guardian” when he played the clubs, though Simpson admits (with a wink) that his parents may have held a different view of the arrangement if they knew the full story. By the time he could legally attend his own shows, Simpson was playing six nights a week in his hometown of Dallas, Texas and amassing bass and vocal chops upon which he would build a successful career. After a year playing bass on cruise ships (“which got old quick,” he noted), Simpson relocated to Nashville and played for Tanya Tucker and Pam Tillis, and then landed at job as Travis Tripp’s bandleader. When that gig ended thirteen years later, Simpson signed on to play bass for the Oak Ridge Boys on the road, which he currently does using a Tube-Tech CL1B Compressor. “It’s like the Rolls Royce of compressors, and I’ve got that perfect Tube-Tech sound 150 nights a year!” he said. 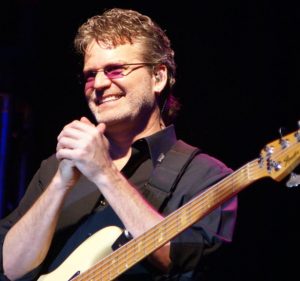 “There’s a reason why the Oak Ridge Boys are in the Country Music Hall of Fame and the Gospel Music Hall of Fame and why they’ve won umpteen awards,” said Simpson. “It’s because they’re the real deal. Even though their average age is north of 70, they bring tremendous energy and enthusiasm to each and every show. They’re kind to their employees and always respect their fans. Playing in the Oaks has been a real light bulb experience for me and it’s the most rewarding job I’ve ever had as a professional musician.”

Perhaps those good vibes rubbed off on his attitude toward his live bass rig as well. Because the Oak Ridge Boys play so many shows in such a huge range of venue sizes and situations, these days Simpson avoids the trouble of dragging a head and cabinet everywhere. “Sometimes I’d get to use the amp, but a lot of times I wouldn’t,” he said. “And even when I did get to use it, I was often forced to keep it quiet. In the end, it didn’t seem worth it.” But that means his tone is entirely dependent on his DI signal chain.

“I’ve been doing session work for most of my life, and nine times out of ten, the engineer puts my bass through a Tube-Tech CL1B,” said Simpson. “What a sound! I recently got my own CL1B, but like most people, I left it at home for fear it would get damaged on the road. Then I’d be playing dates with the Oaks and my sound was good, but not great. I’d get home, play through the CL1B, and think, ‘wow, now that’s the sound!’ I finally decided that since I’m playing 150 nights a year, I might as well fully enjoy it! I brought the Rolls Royce on the road! I put it in a shock-mount rack, and now I’m having fun just listening to my bass every night.”

Simpson plays Jazz- and Precision-style basses made by Mike Lull, which he feeds into an Avalon U5 class A direct box. His FOH engineer takes one output directly from the U5, which serves as the “bassier” part of his signal. A second output from the U5 feeds an Avalon 737 channel strip, which allows him to dial up the mids that accentuate the bass’s growl and string noise. Output from the 737 feeds the Tube-Tech CL1B, with the input gain slightly above unity (“just enough so you can hear that tube!”), the attack around 11 o’clock, the release around 1 o’clock, and the ratio near 2.5:1. Depending on the venue, he adjusts the threshold up or down. The FOH engineer also gets the post Tube-Tech signal and mixes it with the direct DI signal to obtain the right overall tone. On average, the Tube-Tech signal comprises about 70% of the mixed signal.

“I wouldn’t do it any other way now,” he said. “With all that quality going into my in-ear monitors, I can’t tell that I don’t have a huge cab behind me. The Tube-Tech takes all of the drastic mids that I accentuate with the 737 and shapes it into one beautiful, consistent sound. And it’s definitely colored. If you took away the Tube-Tech, you’d notice a big difference.” In many months on the road, the only injury to Simpson’s CL1B has been a screw that shook loose. “I called Richard [Bowman] at TransAudio Group [Tube-Tech’s US-distributor] and, Richard being who he is, had a bag full of replacement screws delivered to me a few days later,” Simpson said.

This article was produced by our US distributor TRANSAUDIO